*Warning: Some of the following may contain hyperbole.

My wife was once told in an OPSEC (operational security) briefing for military spouses that every day, she should alter her route to work or taking the kids to school… to thwart adversary attempts to establish a pattern of life on her. That’s right. My wife. A civilian who doesn’t work for the military in any way. Yes. To school. Yep. I know. We laughed and laughed.

To summarize up front… this whole OPSEC thing has gotten way the hell out of hand. I am convinced it has made us weak, un-innovative, and ineffective for a very long time now. I have probably shouted something along these lines 3 to 4 times per week every week for the last 13 years. My wife is a gracious listener and deserves significantly better.

I am on Twitter. When I tell my Air Force colleagues that I am on Twitter, they look shocked. They look horrified. I might as well have just ripped the Daniel Hulter mask off of my face to reveal a snarling, joker-faced Edward Snowden. We have been absolutely inundated with messaging about OPSEC to such an effective degree, that I still struggle to unlearn the now deep-seated paranoia that has me second-guessing every time I think about speaking to anyone outside of secure spaces. If we pursued a culture of innovation with anywhere close to the level of effort we put into scaring ourselves into silence… well for one, we might offset the damage that the OPSEC regime has had on our ability to be innovative. Let me be clear- Hesitation kills innovation. Methods like Design Thinking help people be more creative and innovative because they effectively pull the stops out of divergence, and one of the most powerful impediments to divergence is self-consciousness.

Army General Patrick Donahoe was one of the first senior leaders I encountered on Twitter who I believe understands the potential behind embracing public engagement with troops. He has recently become even more outspoken on the need for Army leaders to engage with troops on social media. I am so happy to see senior leaders pushing their people to go where the people are and engage with them there, because up to this point, we’ve effectively been tying our hands behind our backs out of fear the adversary does them damage. 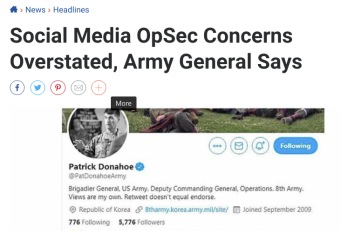 I have spent years struggling to get the people I worked with to just try and use commercial communication platforms and collaboration tools which are orders of magnitude more effective than the “safe” tools we are provided (as I write this, I am on day two of waiting for Air Force Sharepoint to start functioning again so I can get back to work.) I can’t tell you how angry it made me to hear a General call Facebook “The best website in the Air Force” and see senior leaders start to engage on platforms that we were actively being discouraged from using, like Reddit. In response to my pleas to try out something like Facebook Workplace for office collaboration, or Trello, Slack, or Airtable, I was told that for OPSEC reasons, we had to stay on the outdated, dysfunctional garbage we’d been using for decades. It gradually dawned on me that innovation, effective communication, and the type of collaborative capabilities possible through commercially available tools were strictly the domain of leaders who exercise autonomy and ignore stupid rules. I understand how these conditions emerge, but I don’t think I need to explain how dangerous it is to just operate this way, with a complete lack of clarity for most troops on how it is we’re actually supposed to be doing things, with the only people making progress doing it in secret, the only people using tools that work being those with context, connections, and authority; and with OPSEC gatekeepers being given just an absurdly disproportionate amount of cultural influence.

My favorite demonstration of this insanity is the story of the beautiful website https://www.548isr.com. The innovative folks at the iLab created a wonderful space there to facilitate shared consciousness with their innovative compatriots across the enterprise. It makes absolute sense for an innovation organization to have a public website. (I mean really… it makes sense for every organization to have a public website). But when our Wing Innovation Office tried to start one, we were shut down by Public Affairs and told it wasn’t allowed, for OPSEC reasons. I have heard now for a few years that 548isr.com is not going to be around much longer, because OPSEC-minded rule-followers higher up don’t want it to exist. I sincerely hope it doesn’t go away, because I hate to see innovation get snuffed out once again by our deference to irrational fear.

The best we got was to create a monthly newsletter, called The Disruptor, which we blasted out in .pdf format to as many people in as many places as possible- showcasing our efforts and sharing wild theories about Air Force innovation with the community. The connections we established as a result of that effort were incredibly useful. We reached Airmen, other units, and external organizations, all of which propelled us forward in our mission. Ultimately, we stopped trying after Public Affairs bogged us down too effectively too many times in a row. Newsletters are hard enough to put together without having to convince people with power that diverse voices are good. It was too difficult to get approval to get our voice out there. OPSEC. Messaging. Silence.

As someone with a weird compulsion to express unpopular opinions in public forums, I have experienced significant friction with gatekeepers dutifully serving our country by library-shushing everybody who tries to talk and telling us all to stick to email (psst… email is an outdated mode of communication). I have had lengthy interactions with public affairs Airmen and officers in which I sincerely fought to say things in a slightly distasteful way, because I thought it was effective, and because censorship on behalf of “good order and discipline” is not helping anybody… except our adversaries.

(My particular favorite sentence they once tried to remove from a newsletter article I wrote was “Like a bunch of animal hoarders gradually growing scent-blind to the smell of cat urine, we had unknowingly eased into a new normal set of cultural habits.”)

I am proud of that analogy. There is nothing wrong with it.

It is genuinely baffling to me how effectively we’re doing our adversaries’ jobs for them, disrupting our own comms by refusing to use effective communication tools and engage in public spaces. I think that innovation is at least 90% communication. I have seen countless cases in which the thing an innovator needed most was to simply reach the right person, to find a community to learn from, to have a forum in which to test their thoughts against the minds of others. Connection, in so many cases, is enablement.

There is one organization that I believe is pursuing the future we need at the speed and efficacy necessary to stay relevant, and that organization is the Defense Entrepreneurs Forum– a passionate group of forward-thinkers pushing for better ways of doing business by connecting, discussing, and actively working for more value-creation in their missions. Just in the Slack group, every day I find new connections, get feedback from an incredible range of disciplines and perspectives, and get help moving my own efforts into the future while also enabling others.

Unfortunately, one reason they are so effective at facilitating the cross-pollination required to really foster, inspire, and empower innovation across the DoD is because they are a non-profit, unaffiliated with official DoD orgs. They are a virtuous insurgency. Members interact as individuals, which gives them the ability to use whatever works best, un-restrained by the stupid shackles of risk-averse, rules-bound OPSEC considerations.

You know what’s the craziest part? In DEF, despite the lack of hall-monitors, folks aren’t out there revealing national secrets all willy nilly. Despite exercising that glorious freedom to use tools like Trello, Slack, Zapier, and more, they’re only communicating in the unclass domain. It’s mind blowing, I know. You’d think that trusting people to talk about work without blurting out critical info about troop movements was impossible.

Well I’m here to tell you it’s not. Hi. I’m Daniel Hulter, and I’m here to tell you that OPSEC is a cancer to collaborative capacity. What I mean when I say ‘cancer’ is that I believe our current approach to OPSEC is the out-of-control growth of necessary tissue, which would be pefectly healthy in quantities that didn’t choke off the function of surrounding organs.

You know who actually does cause damage to national security?

Thank you for coming to my TED talk.